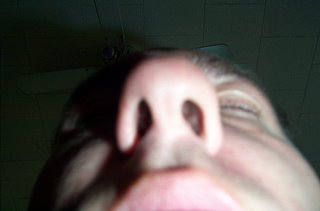 A Promise is A Promise MG. There ya go. Up the nose. Call it a late HNT entry. More band name foolishness: How about The Hammerheads? The X-Rays? Ray was in the band but we had to kill him. Since Exit 69 was deemed "too sexual" (Oy!) does anyone have a feel for Exit 68? Other name suggestions are still being entertained. Vote early but not often!
Posted by AndyT13 at 6:12 PM

eh. this shot does nothing for me but I'll comment cause I'm loyal. Kinda.
Happy Late HNT, dude.

happy late HNT!! and damn I came up with alot of names here man...no feed back...nothing to do with 69...I will be brutally honest- people would roll their eyes just at the name.

check all your comments..I will probably have more...

I think you may be onto something.

How about the Jolly Fockers?

I know, no good, but what the hell.

Could mean everybody is Jim, or that there are Jims for everybody. Or use another name.

I typed it into someone else's comment and then thought, hey that sounds like a band name so I rushed over to tell you.