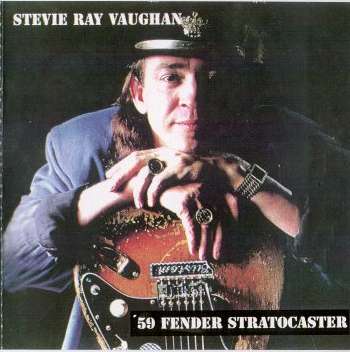 Seems like I've been posting a lot lately. I dunno why. Brain dump I guess. My new friend Bob the Drummer recently referred to what he called my OBSESSION with Stevie Ray Vaughn, pictured here with his famous '59 Strat he called #1 or "First Wife". Notice how the whammy bar is on top? He used a lefty bridge presumably because HE was "obsessed" with Hendrix. Jimi played a right handed guitar lefty and claimed to really like having the whammy and volume/tone knobs on top. Anyway, back to the word OBSESSION; Not so much I'm thinking. Sure I like the guy's music (most of it) and I like playing it. He was beyond compare as a player, no doubt. I don't see myself as a Stevie Ray wanna-be although I'm sure some people might. Fortunately I couldn't give a flying f*ck what most people think. Either they'll like the music I'm doing or not. I have many obsessions and fetishes, but in general musicians are not among them.
Posted by AndyT13 at 9:46 AM

Actually SRV kinda looks like you in this pic. The whammy bar, yeah, I see it. Right there on the...uh? The what?

Beer and Sailing are more a way of life than an obsession but I shan't argue the point. For those unsure about the whammy bar comment it's the metal bar directly below his right ringfinger and passes beneath the R in the word Fender. It allows you to adjust the tension of the strings and therefore the pitch.
Whammy!

I LOVE SRV! He Rocks!!
I've read is Biographies .. have all of his vids, and CD's .. Bar none one of the best - if not the best Electric blues player ever...

Vaughn rocks!!! I own a couple of videos of his concerts and I think he is one of the best guitarists.

If you sound like Stevie - then you are well on your way to becoming a legend. ;)

I wouldn't dare to compare myself to SRV anymore than I would to compare myself to Hendrix. I enjoy playing their music although it is often difficult to do so. Sometimes I feel I am coming close to the inspriation they must have felt. Other times not so much.
The tape will tell. I'll post recordings from the upcoming session and we'll see just how far I have to go THEN won't we?