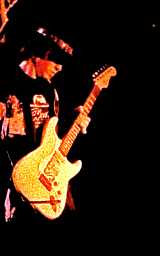 Well, for whatever reason I decided to break out my Stratocaster and start doing the blues again. I really don't know what's possesed me to do so since the solo gigs are so lucrative and so easy and being in a band is such a pain in the ass. Nevertheless I took out an ad on Craig's list and found a rhythm section that knows the tunes and seems promising. We'll see after I hear them but they've been playing together for a while and can sing so that's a step in the right direction. I'm itching to shred some Hendrix and Stevie Ray Vaughn. Lord, watch-the-fuck out, AndyT and Lucky 13 rides again.
Update: GADS! I googled lucky 13 band and found a bazillion of them! I've been using the name or a while but clearly not original enough. Therefore I put it to you, my bloggy peeps: Who would be good for AndyT13 to be playing with? Think Stevie Ray Vaughn and Double Trouble. I eagerly await your silly band names. I'm serious though, a good one might get chosen. :-) Have at you!
Posted by AndyT13 at 11:20 AM

Sorry, I am NO good at that name creativity thing, but I love me some blues!

Andy, Tag, you're it. The meme is over at my site and don't flipping complain, just do it. We have SeaRabbit to thank.

Yup. I can't name a band if I can't go wit Pornzilla. Sorry.