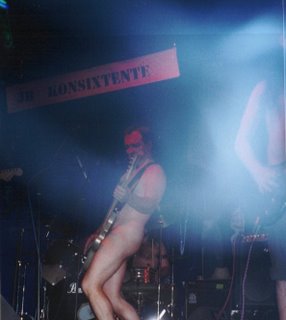 Having accepted, lost and negotiated an agreement with MG I will be forthcoming with an HNT shot for her later this evening as I collapsed in exhaustion when I returned home last night. Meanwhile here's one fully nekkid except for the bass guitar (and socks I cropped out) that some (but not all) have seen of me touring Spain with a metal band. The race last night was long and there was no breeze. It was eventually cancelled when no one finished in the allotted 2 hours. Bah. Re: Band Names - My God People! Of all the suggestions there was only one entry which tickled my fancy, and that was EXIT 69. I like that because exiting a 69 generally means we're moving on to the main event! Alas my future band mates nixed the idea as too sexual. What the hell does THAT mean? Too sexual! Those words just don't go together. For all the fuss made over the name these guys better be awesome or I'ma open up a can O' Whoopass hand out some beat downs. 'Cause I'm ghetto like dat yo. Word to ya mutha. Peace out dawgs.
Posted by AndyT13 at 11:16 AM

What up my brutha?
Nice picture.
Now...just...move that damn guitar!
Re the forthcoming...LOL...is that for MG alone or do we all get to partake in the viewing?

The Spanish ladies must have gone crazy. What do we get to see at MG's place? More?

Can O' Whoopass. Now there's a band name for you!

You should have left the socks. That just turns me on!

well i am glad at least that one of my suggestions tickled your fancy. tell yer bandmates if it isn't too sexually charged for a housewife, mother of three sunday school teacher librarian wanna be they need to get over themselves. hahahaha

Band names: I knew this guy named George who had a band that played regularly at my favorite bar.
Every week he would come up with new creative names.
George and The French Poodles.
The Rolling Georges.
George and Any Three Sides.
George and...
you get the picture.
It became very entertaining...
and his regular audience obviously was able to participate...
You could do something like that...

and hey, i've never commented on your blog before, but i've looked at it, and see your comments on MG's pages...

and my blog is temporarily gone, but i did want to mark this space, if you know what i mean.

yeah, btw, TOO. SEXUAL. What does that even mean? There is no such thing. Is not.

That's what I call a teaser attitude!!!!
Making us wait until 2 minutes before midnight to show up with a tie!!! You better show some teeth with that...:-)))

Haha, Andy. I'll try to think of band names when I'm sitting around picking my nose at work tonight. :)

Hah! Reminds me of the time my ex got arrested in Denver for playing guitar nude...

Puther Muckers
Urine Trouble or spell it You're in Trouble
Pearl Necklace (just an homage)
Tha Boss Stranglers
30 Seconds (which sounds bad but was a food reference)
or the 30 Second Delays.

on my blogroll are my neighbors...seems like maybe you could tell me if they suck.

My lameass couldn't think of a good name.. :-P

I do like Exit 69, though - and it's not too sexual! What, are you playing in a church band?? LOL

can't wait to see the new picture... and email me about another blog hnt challenge ok babydoll???

Well, the husband is watching Robot Chicken on the net...and if his laughing is any indication of something keeping his attention... you should name your band "A Kick In The Nuts."

hell if i know...
good luck

I still think Exit Only is a good band name!

But, Jericho's "Ribmeat" is cool too.

oh and umm...
we are on the same time zone here and well, tis almost lunch time, when do we get to see what you came up with?