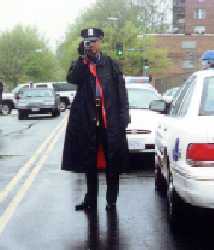 On my way to a meeting today a bunch of cops were stopping people to spot check their registrations and inspections. As I pulled up one started to walk towards me and the cop in the car next to him backed up his cruiser...right into the one walking towards me. Hit him right in the leg and down he went. I yelled "Whoa! Are you OK!" He was shouting and cursing in pain and the other cops standing around bullshitting recovered from their shock and ran over. One yelled at me. "GO!" he said. Fortunately for the cop standing directly in front of me at the time I was paying attention and waited until he got out of the way. Had I hit the gas at that moment we would have had a "two man down" situation. The look on the cop's face in front of me made it clear HE thought I was gonna hit him. I managed to hold it in but once I pulled away I laughed my ass off. I feel bad the guy got hurt but let's face it; I've been harrassed often enough by big burly cops with puffed out chests that it was amusing to see them acting like a pack of idiots out there. Way to go boys. New York's finest.
Posted by AndyT13 at 1:09 PM

all I gotta say is 'ouch'

It reminds me of the Keystone cops-very funny. I too have experienced the less than nice side of the police force and your blog made me smile. Glad ya didn't hit the poor chap, though. So strange and cool to me that you go to meetings now too; it's helped me a lot. Keep rockin!
Hi, Mary Ann!!!!!