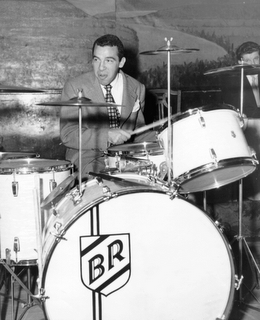 Speaking of All Saints, here's Buddy Rich. Drummer extrodinaire and Patron Saint of all Bandleaders, he was well known for being incredibly exacting, demanding and volatile. He would routinely curse out the entire band on the bus at great length and in exquisite detail. If you had the nerve to answer him back he might stop the bus (in the middle of whatever nowhere you were in) and throw you and your instrument off. Hell, he might do that anyway! "What a prick!" you may say. Maybe so. But you know what? I saw his band serveral times and every single time without fail they were good beyond the ability of mere words to describe. Here's a link to four GREAT rants. Funny beyond the pale. I should mention that I met the guy and he was sweet as could be, gave me his autograph happily and encouraged me in my drumming efforts. The guy could do a roll with one hand faster and cleaner than most cats could with two. So today I pray to him: Buddy? Give me strength.
Posted by AndyT13 at 8:54 AM

great story. i'll have to come back to the links later. i may be soon taking sint jimi as my patron if i can't get janita to friggin turn over properly.

My dad loved Buddy Rich. My dad just turned 75 on Halloween. When he was a young single guy he had a band called the 4 Gems. They played just outside of Providence, R.I. area. Dad played the drums and was awesome! I think that's why I love jazz music to this day - heard it alot growing up. Thanks for the story about Buddy Rich.