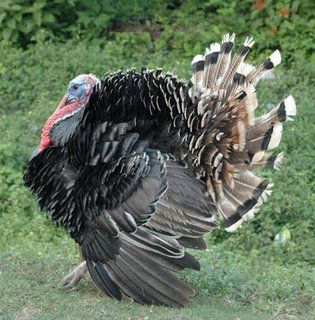 OK well I skipped the gym last night (bad baby!) and went to my favorite local Italian joint Guida's and had Gambieri Fra Diavalo instead. Fuck it. I was hungry and felt like treating myself. THen I went to the blues jam and played Mary in public for the first time. She sounded good.
The Geoff Hartwell band played a three song set and MY GOD! The fucking guy is AWESOME! Truth be told I'm not knocked out by the singer/songwriter schtick he's selling right now but that boy is SOME FUCKING BLUES PLAYER! Holy Shit! Anyway he was followed by some other dudes who were also really good and then I got up and played. I admit to not being awesome but mainly that had to do with playing some generic blues with random dudes including another guitar player who insisted on being loud as fuck. Fortunately when it was my turn we brought it down and I was able to get some tasty licks in. Tomorrow is turkey day and I'm bound and determined to be grateful and thankful for everything. I'm having the beginnings of a nasty toothache which means a trip to the dentist soon and more than likely a root canal. Oh joy. Never had one; not looking forward to it. I'd almost rather have it extracted but whatever. Anyway, rapture and joy, rapture and joy. I hope you all have a fabulous Thanksgiving. Meanwhile I'll be in the corner kicking the cat. Reowr!!!
I dunno if I'll get to post an HNT or not. See you in the funny papers.
Posted by AndyT13 at 10:40 AM

You're not going to play Half-Nekkid Thanksgiving? What kind of pilgrim are you?

you do have lots to be thankful for thisyear. glad the gig went not too shabbily and hope you have a really wonderful thanksgiving