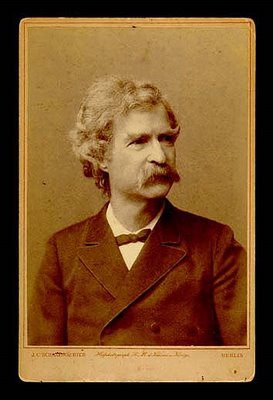 Against our traditions we are now entering upon an unjust and trivial war, a war against a helpless people, and for a base object — robbery. At first our citizens spoke out against this thing, by an impulse natural to their training. Today they have turned, and their voice is the other way. What caused the change? Merely a politician's trick — a high-sounding phrase, a blood-stirring phrase which turned their uncritical heads: Our Country, right or wrong! An empty phrase, a silly phrase. It was shouted by every newspaper, it was thundered from the pulpit, the Superintendent of Public Instruction placarded it in every schoolhouse in the land, the War Department inscribed it upon the flag. And every man who failed to shout it or who was silent, was proclaimed a traitor — none but those others were patriots. To be a patriot, one had to say, and keep on saying, "Our Country, right or wrong," and urge on the little war. Have you not perceived that that phrase is an insult to the nation?For in a republic, who is "the Country"? Is it the Government which is for the moment in the saddle? Why, the Government is merely a servant — merely a temporary servant; it cannot be its prerogative to determine what is right and what is wrong, and decide who is a patriot and who isn't. Its function is to obey orders, not originate them. Who, then, is "the country?" Is it the newspaper? Is it the pulpit? Is it the school-superintendent? Why, these are mere parts of the country, not the whole of it; they have not command, they have only their little share in the command. They are but one in the thousand; it is in the thousand that command is lodged; they must determine what is right and what is wrong; they must decide who is a patriot and who isn’t. In a monarchy, the king and his family are the country; in a republic it is the common voice of the people. Each of you, for himself, by himself and on his own responsibility, must speak. And it is a solemn and weighty responsibility, and not lightly to be flung aside at the bullying of pulpit, press, government, or the empty catch-phrases of politicians. Each must for himself alone decide what is right and what is wrong, and which course is patriotic and which isn't. You cannot shirk this and be a man. To decide it against your convictions is to be an unqualified and inexcusable traitor, both to yourself and to your country, let men label you as they may. If you alone of all the nation shall decide one way, and that way be the right way according to your convictions of the right, you have done your duty by yourself and by your country — hold up your head! You have nothing to be ashamed of.Only when a republic's life is in danger should a man uphold his government when it is in the wrong. There is no other time.This Republic's life is not in peril. The nation has sold its honor for a phrase. It has swung itself loose from its safe anchorage and is drifting, its helm is in pirate hands.
Posted by AndyT13 at 3:07 PM

good words, very good words. thanks for sharing them!

What a great, inspirational post. Eloquent words. That would be a great retort for "you're either with us or agin us." Though anyone who would say such a thing - probably wouldn't listen.

"We have a condition now which is called "a national emergency." Though the legislators and politicians may rant at will, though the newspaper tribe may rave and spread hysteria, though the military clique may bluster, threaten, and clamp down on everything which is not to their liking, the private citizen, for whom and by whom the war is being fought, is supposed to hold his tongue....
I believe with John Stuart Mill that "a state which dwarfs its men, in order that they may be more docile instruments in its hands even for beneficial purposes, will find that with small men no great thing can really be accomplished." I would rather my opinions and appraisals be proved wrong--by the emergence of a new and vital spirit. If it takes a calamity such as war to awaken and transform us, well and good, so be it. Let us see now if the unemployed will be put to work and the poor properly clothed, housed and fed; let us see if the rich will be stripped of their booty and made to endure the privations and sufferings of the ordinary citizen; let us see if all the workers of America, regardless of class, ability or usefulness, can be persuaded to accept a common wage; let us see if the people can voice their wishes in direct fashion, without the intercession, the distortion, and the bungling of politicians; let us see if we can create a real democracy in place of the fake one we have been finally roused to defend; let us see if we can be fair and just to our own kind, to say nothing of the enemy whom we shall doubtless conquer over."