Let Me Paint You A Picture 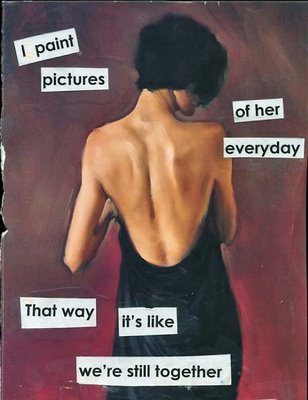 That's not true but I wish it was. I haven't had much gumption to paint. I have however been preparing the first official release of AndyT13 on CD Baby. It will have 13 songs obviously. Right now I have nine done and two more in the works. I'm making some serious progress at The Gym. I went 4 days in a row last week for an hour a day, then took three days off. I'm repeating that pattern this week, but for two hours a day. Good news: I was under my 1800 calorie limit yesterday. Bad news: 1000 of those calories were beer. OK it was unrealistic to quit drinking with beer in the fridge when I'm alone and alternating between boiling rage and hysterical crying. I got some good writing done though. I started a demo of one tune but I'm having trouble with the melody. The phrasing is odd and it's in a key that's on the low edge of my range which makes it hard to sing. Change keys you say? Yes but then the upper notes sound too high. I won't get into too much detail but song writing for me is more like channeling a spirit on the other side of a veil than creating something new from scratch. The song tells me how it goes but often it's not sure and needs my guidance. They're wily beasts, my tunes are!
Posted by AndyT13 at 8:35 AM

My dear Andy friend. I'm glad you had some beer. I'm glad you've been doing the gym thing. But most of all I'm glad you are writing and creating. Although I think it sucks that most of the time people have to be in a shit place to produce the most powerful stuff.

Thanks Zoomie. I'm having a tough time reconciling good nutrition and beer. However, if you read Hitchhiker's guide you'll know beer is a powerful anti-shock substance and having sustained a nasty shock maybe it's not so bad.
Protein rules, calories drool. Or some shit like that. Namaste.