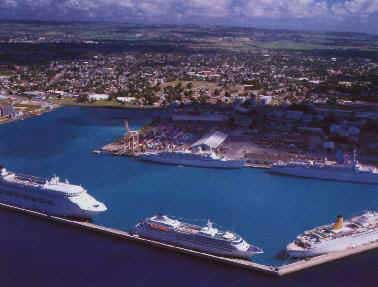 Wherein I am nearly executed for the color of my skin: In late 1995 I was waiting at the Westchester County Airport for my friend Mike to fly down and pick me up for a gig up in Boston whenI met this beautiful black woman named Sue. She was there with her hot sister and her sister's doubly hot lesbian lover. We all hit it off fabulously and I got her number ostensibly to have them sing on my new record.

She was separated from her husband and I took her on a couple of dates. Out of the blue she offered to fly me to Barbados to visit her other sister. Um, let me thinkYES! So off we went and it was a good time. While we were there she rented a car for us assuring me that she'd have no trouble driving on the other side of the road. Boy was THAT never true! I ended up doing all the driving and that was cool, though I was wasted most of the time. One night she was tired and said "You take the car and go have a good time. I'm crashing out." I said "OK" and hit the road. I went to a few bars and that sort of thing when I saw an old old rasta dude hitch hiking. Being a kind soul I hate to see an old man hitching on a dark road in the middle of the night so I picked him up. He had a big scar across his face as if he'd been mauled by a bear. One eye was missing and completely covered in scar tissue and he had long white dreadlocks down to his knees.

He was a nice enough dude and said he was headed to the capital city of Bridgetown. I said I had nothing better to do so I would happily ride him into town if he'd show me some of the hot spots. I admit this wasn't probably the wisest thing to do but I wasn't thinking clearly, what with all the beer I'd been drinking and the fine, um, tobacco that we'd been smoking.

So he takes me to some club and perhaps the two metal detectors and the armed bouncers should have been a hint that maybe this wasn't the place for me but I've never been one to shy away from a bad idea.

Let me set the scene for you: here's this long-haired hippy looking white boy in a dashiki shirt in a club in Bridgetown, Barbados at two in the morning with a great big load on, dancing up a storm and having a great time. Dozens of GORGEOUS Bajan black women were flocking around, chatting me up and dirty dancing with me. Apparenty a white face was something new here. I was having a damned good time when I noticed that the girls had sort of faded into the background and I was now surrounded but a half a dozen line backer looking dudes with unfriendly looks on their faces. The biggest one looked down at me and said "Do you know where you are white boy? You know you're going to die here tonight, right? We're going to take you out, kill you and bury you on the beach." I was formulating a suitable reply ala John Belushi in Blues Brothers ("Ohhhh Puh-LEASE don't kill us! It wasn't my fault! etc...") when out of nowhere the little old rasta guy interposed himself between myself and my would-be assailant saying loudly "You leave 'im alone mon! 'E wit me you unnastan?" jabbing him in the stomach with his knarled finger. As I braced myself for the worst these men all got an extremely chagrined look on their faces and with many apologies faded back into the crowd. The old rasta dude leaned into me and calmly said "I tink is time fa us 'a leave mon." With this I heartily agreed and we beat a hasty retreat. We then proceded to his New Yorker friend's deli where were partook of some more fabulous, um, tabacco and we talked well into the morning light. His friend was apparently born in Brooklyn and I was immediately HIS nigga and nothing was to good for me. Beer, food, um, tabacco and fine conversation ensued. We had a great time and said our goodbyes around 8AM with promises to write and I drove back to Sue's, had breakfast and regaled her with the tale after which there was nothing to do but drink fruit drinks all day and nap on the beach. I don't know who that dude was but I want to publicly thank him for saving my ass that night. God, how I love the Caribbean!
Posted by AndyT13 at 1:27 AM