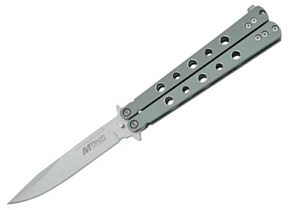 Here I offer you the mathmatical formula Butterfly + Knife = Hospital or another thrice told tale of my misspent youth. I was hanging out with my good buddy Mike, introduced below, at Simonds Park in Burlington Massschusetts.

I was maybe 16, and he was 18. He said "Check this out." and from his pocket produced a shiny new brass butterfly knife. I knew what they were but hadn't seen one before. He began doing what you do with butterfly knives besides stabbing people. That is to say he began twirling it open and closed with considerable speed. You may say I was less than comfortable with this as I felt that if it slipped from his grasp it would likely result in injury to one of us and I said so. He scoffed at this and said in effect "Dont be a pussy. I'm not going to..." and with that the knife slipped from his grasp as I had predicted. This produced an interesting effect in space-time. To wit: time immediately slowed to half speed as we both watched the knife fly straight up, invert itself in a graceful arc and then fly straight back down where it buried itself two or three inches into Michael's left thigh about midway down. We both stood there in shock for a long moment and then he calmly reached down and extracted the blade from his leg. This produced a lovely fountain of blood arcing out from his leg and splashing on the ground. I believe he was heard to utter an obscenity at this point and proceded to try to take a step. This was a tactical error on his part as his leg wouldn't support his weight and he went down hard. WHAM! Time returned to normal speed and then in fact sped up considerably. He said "You gotta drive." and I helped him into the passenger seat of his brand new Cutlass Supreme (ironically enough!) and I jumped into the driver's seat, turned the ignition, threw it into gear and floored it.

This would be a good time to point out that a) I didn't have my license yet, and b) had never driven a car with power steering or power brakes. His Cutlass was thoughtfully provided with both of these amenities, for which I was thoroughly unprepared. Needless to say a number of curbs were run over and there was a good deal of fierce acceleration followed by screeching halts as I mashed the accelerator and brake alternatively. I'm sure this was uncomfortable for Mike to say the least as he held his hand on his leg to staunch the considerable flow of blood. He was a trooper however as I drove approximately 90 MPH through town towards Leahy clinic where, coincidentally, his mother worked as a nurse. I pulled into the ER where the ambulances park, lept from the car and ran through the double doors past the amazed doctors and nurses congregated there. Grabbing the first available wheelchair I sprinted back out the doors. I came out to find Mike leaning against the side of the car smoking a cigarette and holding his leg. The shock was evident on his face when I came out followed by a veritable SWAT team of doctors and nurses prepared, I'm sure, for the very worst.

As it turned out he had not, in fact, severed the artery in his leg as I had assumed. It was only a flesh wound as they say. His mother stood there and harangued him for being an idiot as they stitched him up and all was right with the world again. An interesting side effect of this sequence of events was that the police staunchly refused to believe the truth of the matter, which was that it was merely an unfortunate accident. They spent several hours interrogating us both and assuring us that they would protect us from whoever had done this. Ah, if only that were true! Finally they just let us go and I never got a ticket for driving without a license. The lesson I took away from this incident was never play with weapons. Use them only for their intended purpose; to kill.
Posted by AndyT13 at 1:02 PM

You have excellent insticts. If I ever stab myself while playing with a knife, I hope you're around.

Ahh yes... I think I remember this... musta been just after he had that big old green beater of a station wagon. LOL.