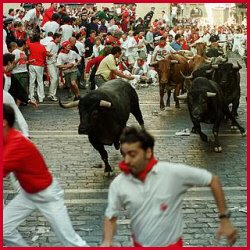 Running with the bulls

In eary 1999 my friend and roommate Luis AKA Tripi informed me that he was going to Pamplona, Spain to visit some friends during the running of the bulls festival and asked if would I like to go? Being a Hemingway fan and an adventure junkie I immediately agreed that this would be an excellent plan and we bought the tickets.

The flight on Iberia airlines was an experience on its own. Newark International airport is rabidly anti-smoking but the MOMENT the plane left the ground EVERY SINGLE PERSON on the plane lit a cigarette including me when I saw it was cool. It was a long flight and we drank copious amount of $5 beers. We arrived in Madrid, Spain loaded and took the bus to Pamplona along with some very smelly punks who evidently hadn't showered in weeks. Luis had a bandana over his face like a cowboy bank robber to ward off the stench as I watched the arid land roll by out the windows of the bus.

We met up with his Austrian girlfriends Birgit and Gudy and they drove us out to Pamplona to meet Pilar, the woman putting us up for the week. The atmosphere was very much carnival and we drank recklessly. I had the misfortune to get a cold and I was ill for several days but this didn't stop us from partying insanely as only the Spanish can do.

Two memorable moments from the trip: People were climbing this Pylon, and miniature washington monument looking thing and diving off into the crowd some 30 feet below. This was OK when the square was packed but results were mixed when there weren't enough people. We saw one guy land HARD and not get up. Also people were randomly thowing lit fireworks into the crowd. Good times!

After partying all night we went down to where they were running the bulls where the locals gave us the scoop. Bulls are heavy. They always take the outside of any corner. Stay on the inside and you won't get run down. Also, bulls are herd animals. If they see a bull in front of them running they will continue to run. If they get seperated and can't see the bull in front of them they will stop and take out anyone nearby. That would be a good time to climb the fences ringing the route. So they freed the bulls and we ran for a bit and when they got too close we climbed out letting them run by beneath our feet inches away. Very exciting stuff.

Hemingway was more eloquent about it but whatever. We skipped the bull fights and drank instead. It rained like crazy later in the day and I recall that all the buildings had an overhang such that you could walk on the sidewalk and not get rained on. You just went from building to building and bar to bar while it poured rain. The last day we had stayed out all night drinking and Luis was incoherent. He went to bed and I went with the girls to the Basque country. Driving through the Pyrenees mountains was amazing! San Sebastien is a beautiful old city and we had lunch and a drink and they went to lay on the beach.

Being an explorer type I walked three miles or so down the beach. To my left a stone wall rose some 50 feet and to my right the sea kept rolling in. Suddenly I realized no one was around and the tide was coming in fast. I immediately reversed course jogging along the sea wall as the tide came in faster and faster. Soon I was up to my waist in seawater. At least it was warm even though it was the Atlantic. Apparently the bay is shallow so the sun heats the water well. I eventually had to swim oout soaking my fanny pack, passport, money, etc...

At least I didn't drown but it was a close thing. They say in Spain that they have so much sun that they could export it. I dried quickly and we had lunch in the town square and returned to Pamplona. The next day we took the bus and the long flight backto NY and filed another adventure into the archives.
Posted by AndyT13 at 2:41 AM

Great story! Uhh...but I think you forgot to include the details about the sex. You didn't go to Spain and not have gratuitous foreigner sex before risking getting trompled to death, did you? Tell me it's not so!

Nah, but after the bulls ran by I was out back fucking the cows. Hey, everyone was out watching the bulls. You have to play it as it lies. Moooo!

cool story but running with bulls not me i would b 2 scared.