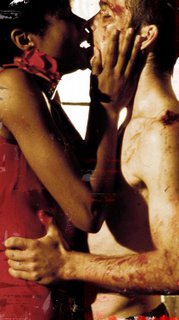 Actually, the movie is titled "28 days later" and is about zombies. I feel kind of like one. Last night I had my first "drunk dream". Well, hardly my first but my first since I decided to stop drinking. I was with my bass player who was about to go to jail for possesion (in the dream) and for some reason he was showing me his car, some sort of old camero or something, and as we smoke a joint he shows me huge bags of dope stashed all around inside the car and shoves one in my coat. I get totally paranoid and I'm like we're OUT of here and just then a cop knocks on the window. Great. We get out of the car and I'm trying to get my shoes which (apparently) I kicked off while we were sitting there. I'm sure we're about to be totally busted but the cop is picking stuff off the floor like half empty beer cans and roaches. He's got one of my shoes and pours beer into it (presumably so I'll reek and he can bust me for DWI). He tells my buddy to take a walk and I'm keeping quiet because the cop thinks it's MY car for some reason and I want my buddy to at least get away before I disavow owning a car full of dope. I try to explain to the cop that I haven't been drinking and he doesn't care. He offers me a choice, would I rather walk away or would I prefer if he bust me? I want to argue but I can't because I apparently AM drunk and high and I tell him I'll be walking the opposite direction from my buddy and NOT driving and then I wake up in a massive cold sweat. There was probably more and I really wanted to get up and write it all down right then but I was too freaking tired. So I got up and ate cold spaghetti instead. I cancelled my guitar lesson for today. Going to the gym instead. I need the excercise more than I need a guitar lesson and I can't do everything.
Posted by AndyT13 at 10:39 AM

exercise... good choice.
I need some of that.

yuck, sounds NOT like the way to start your day. hope your waking moments are less distressing and WOOOHOOO on 28 days!

Yeah, a little rough. On the upside I wasn't drunk or stoned so it's all good.

It's a typical kind of dream while you're in the process of changing your life. And your choice to work out tells me you are making good decisions, painful as they may seem.

Yikes...better a dream than real life. Sounds like you made the right choice to walk away. I agree with "bud"...Mmmmmm....cold spaghetti.

Ouch... this dream is almost as good as the one I had about having my right arm cuts in order to give birth to twins...
What our brains are doing at night?? Fucking with penguins, I bet...