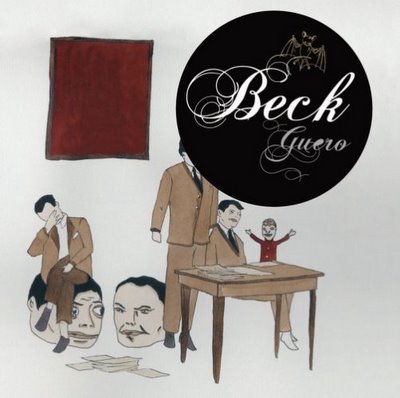 I'm digging on Beck's new CD Guero today. Guero is mexican slang for a tall skinny white guy. I've always had sort of mixed feelings about him. I generally really like two or three songs on any given CD and think the rest is dreck. Also, the fact that he's a scientologist kind of puts me off. I really don't give a shit about people's religion since my feeling is that's all pretty much psychotic bullshit no matter what you "believe" whether it's the ghost of a 2000 year old Rabbi or Thetan monsters from outer space or the Id or whatever. I just find myself thinking about Tom Cruise when listening to Beck and thinking about Tom Cruise is never a good thing. I'll say this though, Beck's website is kind of cool. Anyway I was in Barnes and Noble and I listened to the first song 'e-pro' and liked it enough to drop 15 bucks for it. No wonder I liked it so much. It's the sampled riff from Whatcha Want? by the Beastie Boys. Apparently there's a nostalgia for that old school shit as evidenced by The Chronic-what?-cles of Narnia video on SNL. I've got zits on my friggin zeitgeist. Na na! Na na na na na na! Que onda guero? Anyhow in spite of myself I like 9 of the 13 songs so that's pretty good. I just got a package from Amazon.com and can't remember what I bought. Yay! Christmas surprise! Oh! It's the sequel to God's Debris! The Religion War! Good readin'! Puto!
Posted by AndyT13 at 12:14 PM

I read over your blog, and i found it inquisitive, you may find My Blog interesting. My blog is just about my day to day life, as a park ranger. So please Click Here To Read My Blog

Ok I may have to buy this cd now!

I like how the scientologists believe that we're descendents of clams. They say if you don't believe that theory then your jaw will start to ache because it's the most clammy part of you.