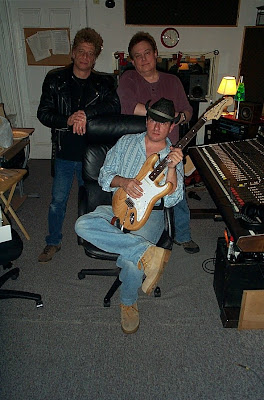 Well, Pete (left), Ric (right) and I went into The Loft Studios in Bronxville NY last night from 7PM to midnight. We spent an hour setting up and then recorded 13 tunes in 4 hours. We only recorded bass, drums and rhythm guitar. Tonight I go in for another half day to overdub vocals and lead guitar and (I hope) do some preliminary mixing. I'll reserve judgement on just how well or poorly we did. There was virtually no listening back. Beyond "Here's a few bars of what we just recorded" on the first song we just cranked right through. I relied on the bass player (Ric) and the engineer (Crawford Brown) to say "Yeah, that felt good." for any given take. I hope they were right. The titles were (for my own benefit since you won't know the difference) were My Lord, Just Can't Let You Go, It's All On You, That Ain't Right, Ain't Gone Be Your Fool, You're Not, No Denyin', No More, Trouble Road, Macho Mambo, Sayonara Samba, I'm So Sorry, Devil and The Deep Blue Sea. I wanted to record a tune I wrote Saturday night called "That's What I Heard" but we ran out of time and energy. I could have probably pushed it on them but it was late and we were all shot. I got almost everything in one or two takes except for "You're Not" which turned out to be quite a bitch. We played it OK in rehearsal but for whatever reason (the caffiene?) we couldn't maintain a steady tempo. It's a fast tune to begin with so when we were speeding up it was unmanagably fast by the end. We ended up making like 6 passes at the thing. Anyway, I have the tunes hooked now. Let's see if I can reel them in. UPDATE: Well, I got vocals laid (yes, laid) on 6 songs. I booked more time for next week to do vocals on the other 7 tracks and guitar leads, etc... on all 13 tracks. Then? Mixing. Ugh.
I had really hoped to be done by my birthday next Thursday. Well, at least I'll have something to play for you by then. Cheers! HHNT!
Posted by AndyT13 at 9:27 AM

Good luck with that. Just think of it as no bad can come from creativity. You'll find something useful in the end I'm sure.

Thanks for checking on me at my blog. I am not really at liberty to give details on the broken heart, but it's still broken and could be for awhile. Love is truly the suck sometimes.

That's a mountain of work in one night! I hope you're happy with those takes. I truly do. I spend that much time on one song. But Helen is a total perfectionist and I'm, well, a slow learner. Good luck, Andy!

Sounds like you are doing well, Andy, and I am really happy to hear that!

wow, i dunno much about much but that sounds like a heluva a lot of work. can't wait to hear....

Woo! Andy I'm so happy for you! It sounds like everything is lining up and working out and wow, you're recording already.. nothing but bluuuue skies, do I see! :D

Well it looks like you are going to be having a blast the next couple of days! What fun.


You are looking super stylee and slim and trim, sir!
HHNT Andy!

Here's to it going smoothly for you! Can't wait to hear the finished product.