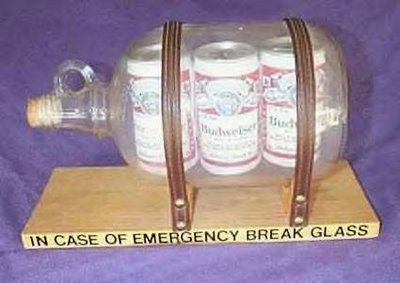 I've been saving this up (pardon the pun) for a later post and later is here. Today is our lame assed office party. Normally it's pretty cool with the house band and all 1200 people hanging and partying all day. There's no alcohol but many of us industrious types handle that on our own. Well, we did last year. This year I'm out of that running. That came as a bit of a shock to me and everyone else. Anyway, this year there's too many of us so we're having TWO parties. One for us in engineering and one for the production people. Here's a hint: engineers are ugly, male and boring. The production people at least have a few hot females. So we're having a dry, stag Christmas party full of speeches by the president and a DJ to which absolutely no one will dance. The worst part of this is that the owner is spending many thousands of dollars for a party when what everyone really wants is the half a day off. And I can't even get drunk nor can I go to the meeting I really NEED to go to in order to deal with all this. Meh. 58 days.
Posted by AndyT13 at 11:10 AM

oh yuck, that sucks all the way around. big time. have to get creative here......lemme get back to ya on how to maintain sanity and sobriety through it....

WHAT? No dancing? How boring! What a waste of money to throw that party and everyone just stands around. He needs to get a clue and just dish that money out to everyone else. I don't have a very creative mind today...so I can't help you there. I'll leave to to Lime ;o)

dancing is good for the soul.....fools I tell you.

Aww … Guess you’ll have to make your own fun after the party! Happy HNT.