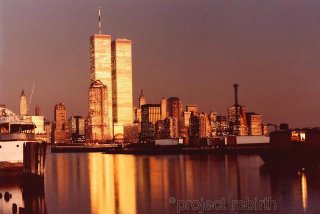 I'll probably get a lot of shit for this post but I'm it up anyway. I miss the twin towers but I wish they'd build something, ANYTHING, on the site. I'm sorry those people had to die senselessly and I'm sincerely sorry for the survivors' grief BUT...enough already. This is not a national holiday. It's time to stop with the tearful tributes. Bad things happen, often to good people for no good reason. While the media is rehashing this story ad nauseum et ad infinitum here's what they're NOT talking about: Click Here for the Top Ten News Stories You'll Never Hear on the news: "Traditional media downplaying or ignoring significant events." No shit. Some of these are pretty bad. I especially like the fact that the Pentagon is now exempt from the freedom of information act. What could possibly go wrong? Those who need oversite the most are getting it the least. Eisenhower had it right:

"In the councils of government, we must guard against the acquisition of unwarranted influence, whether sought or unsought, by the military-industrial complex. The potential for the disastrous rise of misplaced power exists and will persist. "

Now we have the military-industrial-entertainment complex. When the jack booted thugs come to put a black bag over my head and throw me in the back of a van never to be heard from again I'll have the bastards at Fox News and CNN to thank. They are lying to you. Resist.

BTW, if you think I'm some nut job left wing commie pinko fag you're mistaken. I merely value my freedom and I see it being eroded in favor of a facist police state every day. Read the constitution. Are you prepared to defend it against your own government by force of arms if need be? If not you might be called a coward (or worse a sheep) in some quarters. Just saying...
Posted by AndyT13 at 11:19 AM

I'm with ya on this, babe. I hoep you don't get tossed in the back of a van. I'd miss you.

I would miss you too, that is why I chose to post mine of the video with the new new york, and how pretty it is now.

I liked how it had the black and white and then when it went to color it was all badass New York now.....

We have gotten to the point, now, where we really don't have to watch TV to get the news. Or we can watch CNN for 15 minutes and get all of the 'real' news that we need to see.

Turn off the damn TV, read the front page of the paper, and get on with living your life. Nobody's selling any recipes for happiness on "Nancy Grace."

I mostly just can't watch TV today. It's been turned off. No news, no newspapers....just breathing.

Scary; of all those stories the only one I was very familiar with was the warming up of the oceans, and that's because I'm a member of Sierra Club and very into the environment and the outdoors in general. I agree that 9/11 shouldn't be so dramatized. Remembered, yes, but not hyped to the point that one wonders if there isn't a little propaganda going on. Five years after 9/11 the government needs to drum up more support for the war. I thought something was being built at the WTC site; I think a memorial of some kind should be included in whatever is built, but definitely something should be rebuilt there. Time moves forward or it stagnates.

BTW, I'd miss ya too. A bunch of us friends and readers would have to go out searchin' for ya, and it could get ugly...

I was wondering how a normal New Yorker felt about the whole 9/11 issue five years down the road. I am glad to know that I am not the only person who feels this way.

i totally avoided any tv or radio news. i did post a memorial for a victim. but the media glut telling how i should remember does bother me.

even on days other than this i have to say i have the same complaint. most of 'the news' is propaganda any more so thanks for that other link.

oh hell, andy, did you look at the time stamp? can i be forgiven my transgression given the hour of the day and my fitting use of dialect in my own post? please hon? what must i do to atone?

i won't do it any more:P

I'm probably just to be called a donkey... but I'm ready to kick in the balls and bite all I can in favor of this post!!