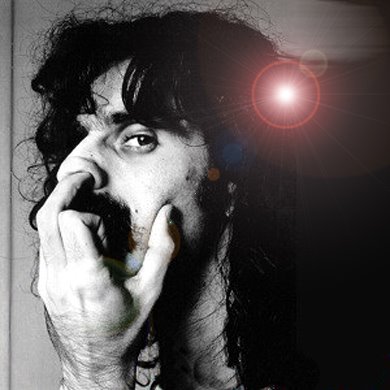 At The Beacon Theatre NYC Ruth Underwood, Napoleon Murphy Brock, Dweezil, two young keyboard players (male and female) who doubled on horns and some drummer and guitar player I didn't recognize. Steve Vai and Terry Bozio came on about halfway through. High points were The Black Page, Zombie Woof, Peaches en Regalia, and Nanook of the North/St. Alphonso's Breakfast. They played a lot of stuff I didn't recognize other than being obviously Frank Zappa. They played something else from Hot Rats I don't know the name of. Definitely worth the $50 and a schlep into the city. My buddy is an even bigger Zappa fan than me and he didn't recognize everything. He claimed a lot of it had to be early stuff since he knew everything from about 1970 on. They started at 8PM sharp with a movie of Frank jamming two songs but I can't remember the names. After intermission the band played a song and it was kind of like the Nat/Natalie Cole thing. They had extracted Frank's guitar solo from a recording and played it (with video of him doing it) and they played the song (presumably to a click of some sort) and "jammed with Frank". It was good though frankly (pardon the pun) I felt it was a bit morbid. Still I imagine it was pretty cool for Dweezil. He was nowhere near the commanding stage presence that Frank was so mostly it was the Napoleon Murphy Brock show. At one point Dweezil was "directing" the band (and the audience cheering in sections) they way Frank used to with hand signals. That was pretty cool. Steve Vai is, of course, an insane evil guitar God. Dweezil is pretty damned good too though at times between the two of them I was like "OK already with the "wheedly deedly deedly wheee!" Sheesh. All in all pretty stellar though. I give it 5 thumbs up. Go. See them. Go.
Buy Tickets and See The Schedule Here Chicago Illinois next Satuday Momo.
Posted by AndyT13 at 10:52 AM

I'm glad you enjoyed it, Andy!

I've seen Steve Vai a few times and the drummer on this tour (Joe Travers) played with another Zappa guitarist, Mike Keneally, when we saw him last year. All of those people are fabulous musicians.

I'll check out those tickets!!

Steve Vai, Ihaven't hard that name in forever. I did hear that Dweezil was alot like his dad but I never got into them. It sounds like a rockin thing just the same! xox darlin!

MT is going to that show tomorrow night, he's totally psyched! Glad that you enjoyed :-)

I remember we went to see Frank Zappa back in the '80's. Do you remember that??? I think it might have been at the Worcester Centrum, but my memory is hazy.