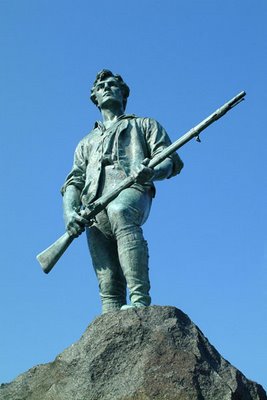 "Never wrestle with a pig; you both get dirty but the pig enjoys it."
I don't normally talk about political or social issues on my blog because in general the elites who have access to this technology tend to think I'm a Neanderthal because of my less than progressive attitudes about some things. I used to be a leftist commie pinko fag but I grew up and noticed that not everything they taught us in college was really true or practical in the real world. Shocking, I know, but there it is. So my experiences have pushed me right to the center politically. Deal with it. I know I'm not the only one.
The issue: Gun control. You can have my gun when you pry it from my cold dead fingers. The constitution guarentees us the right to keep and bear arms but you couldn't guess that in NY. Sorry, but I don't give two shits about your mommy state "what about the children" crap. Teach them to shoot. They might need to overthrow their facist goverment some day. Quit it.
The issue: reparations for slavery. I never owned a slave. No one in my family ever owned a slave and in fact a large number of my relatives fought with the union to free the slaves. How on Earth does that make me liable for reparations to anyone? It's not possible to administrate such a thing fairly even if it were a good idea, which it ain't. Quit it.
The issue: politically correct race names are an oxymoron. African-American, Irish American... Horse Hockey! If you were born in this country you're an American. Period; paragraph. I don't give a crap where your ancestors were from, YOU are an American and your race is unimportant. I'm a blue-eyed, olive skinned Irish and French American with native American and Spanish royal blood. That and $2 will get me on the subway just like anyone else. Quit it.
The issue: religious zealotry is dangerous to society at large and needs to be exterminated. If your God tells you that you must kill or enslave those who believe something different than you that makes you a menace to society. You need to be put down like a rabid dog. I don't care what flavor you are. You must die for the good of mankind. All of you. I'm not sorry. Quit it.
The issue: so called "gender norming" - Men and women are different. It's a fact. Get over it. Neither sex is "better" or "worse" than the other. We both have our strengths and weaknesses and we are designed (if there is such a thing) to complement one another. Making everything in the world gender non-specific is not only annoying and unnecessary but downright counter-productive. For example, just because some people think women should be fighting on the battlefield in a war doesn't make it a good idea. Quit it.
How come every bar can be made to be non-smoking? How come every bar can be made to have handicapped access? How come every bar can be made to have a gender neutral bathroom? How come every bar can be made to hire a certain number of ? What happened to personal freedom? You want any of those things? Great! I'm sure you'll have a clientelle, but you shouldn't be forced to do these things by governmental regulation. It's intrusive, authoritarian and un-American. Quit it. Some of my faithful readers may be appalled at these sentiments but they're mine and I'll own up to them. If you want to disagree in the comments feel free but please keep it civil. That's the problem with discourse today. No one can talk about anything without shouting and name calling. You got a beef? Fine, let's have it but leave my mother out of it or I'll shoot you.
Posted by AndyT13 at 11:09 AM

This, unsuprisingly, was my FAVORITE post. . . seriously. and i agree with EVERYTHING You said... even the Reparations. The only people who want reparations are those who don't have a job anyway. Did I say that? yes. Am I being Bougie? Perhaps.

I'll admit, when I read the

I thought, "oh no.." but after reading the whole post,
you won't get any disagreement from me... maybe just an "amen"...

here, here
Andy dear,
you are my favorite qweer ;)

I disagree with at least one of your points ... ooops, two ... but Jeez Andy, you don't really expect a girl to tackle this kind of stuff in a comment do you? Besides, I REALLY avoid political arguments in blogland.
I'll just leave it at this... You've been heard and understood and I'm content to disagree.

Well that is a mighty big "SOAP BOX" you are standing on there Bucky.... and as I listen from the front row of the crowd, I jump up in excited agreement and yell, in those immortal words as sung by the B5'2s..."Tell It Like It Tis"

It's nice to hear your thoughts about things.

I love you so much!!! =) No wonder it never worked out with us, though-we're both Irish and French!!!!!! I agreed with most of what you said; it brought me back to the days of listening to Jello Biafra (do you remember that??) and kvetching about the government. I personally love being a woman and have no desire to go to war. I'd rather be home with my kid; sue me I guess.

Dude, that's the best argument I've ever heard for guns. And I don't even own a nug.

I agree with everything you said. Although, I'm not entirely sure guys should go to war either. What kind of fathers and husbands do guys who have killed other humans make? I hafta guess that there is some humanity lost in the effort, noble or otherwise. Is Iraq worth what is costs to our families?

i'm a day late and a dollar short, but i loved this post.....well done, bravo! don't quit it