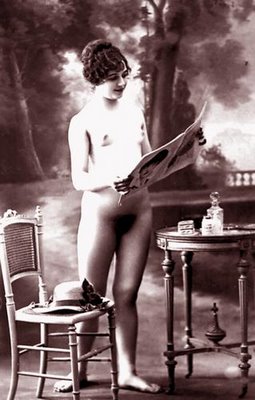 This pic came up under Google images "Manic Monday" and I liked it too much to pass up. "Let's see, the horoscope says I'll be forgetful today. What could I have forgotten? I have my sherry, my newspaper, my hat...what could it be?" Actually I think she's hideously unattractive in every way, except for the fact that she's naked, which always improves one's view of the subject. Lori sent me a remarkably incriminating photo of herself in a coon skin cap. OK, it's a fox skin cap and no she's not naked, you pervs. Anyway I threatened to post it because yes, it's hilarious, but I wouldn't embarrass her for my own amusement. Well, not THIS time anyway. Happy Monday ya big freaks. Sailing season approacheth!
Posted by AndyT13 at 12:49 PM

Looks like she needs a little landscaping. I guess they didn't do much of that down there back then. Which do you prefer? Shaved or Bushy?

Anybody else seen that video/joke?

Well since y'all asked I prefer shaved OR furry. That in between crap is for the birds. Mainly 'cause it's bristly and it chafes my nose.

before the days of waxing...

LMAO @ the comments you added to the photo!!!

I get manic sometimes.