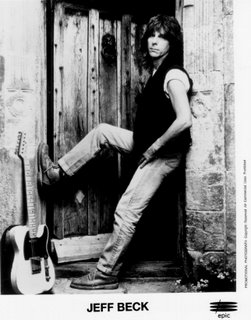 I've done posts on Jimi Hendrix and Stevie Ray Vaughn but it's time to say a word about the most under-rated guitarist of all time; Jeff Beck. Firstly, he's an amazing guitarist. He's gets sounds out a his strat with just his fingers and an amp that most guys can't make with a whole rack of fancy effects. His sublte microtonal control bending, sliding and using the whammy bar is unparalleled. It's not so much his technical prowess but his ability to emote through his instrument in a clear and heartfelt way. Gets me every time. Also, he's a handsome devil. Another thing that makes him great is he isn't one of those eat, sleep and breathe the guitar guys. He builds hot rods for fun. He does lots of other stuff. All in all a fascinating, talented and amazing individual. Individual; that's the key. His work stands out like crazy. If he's playing on a record you can't miss it. The tone is just so uniquely his own. Also he plays with his fingers rather than a pick. That impresses me. I do that a lot too. Anyway, I guess maybe next we'll feature some more guitar heros in the next little bit.

I remember him from albums that I listened to as a kid from my sister growing up. My fav was from the Yardbirds "Shapes". Good blog today. Thanks for the memories Andy.

I kinda like Satriani myself. Though he can't really sing.
And he's not very good looking.

Oh well...there's no accounting for taste!

Happy New Year to you!!

ah very cool. and i say bring on the next in the series of guitar heroes! tell me more!

He is a great guitar player... and also pretty hot.

His sound adds to a melody and I think that is what puts him with the greats.

I think Lime's idea is a great one. Have a guitarist day or a theme for a month. Pick all the fav's and a few that you really don't like or whatever. I am sure you could critic on every guitarist who made a noise :)