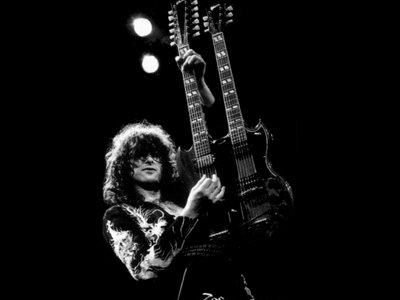 "If I played guitar I'd be Jimmy Page; the girlies I like are under age!" That quote is from The Beastie Boys but I forget the song. It HAS been heavily rumored that Lord Page prefers them young and docile. He is purported to have a collection of whips, chains and other paraphernelia for the abuse of young and beautiful girls. He has nothing on Bill Wyman (bassist for The Rolling Stones) who I hear married his 13 year old sweet heart. At least they weren't related (like Jerry Lee Lewis' bride). Anyway, his sexploits aside, I admire Mr. Page most for the fact that he's an amazing guitarist. Arguably Jimmy Page is the most immitated guitarist in the world. He had it all; looks, flash, style, substance, talent, control, innovation...come on who else ever used a violin bow on a guitar? Even Eddie Van Halen (a future subject of this series) claimed to have gotten the idea for his famous two-handed technique from Mr. James Patrick Page. During the solo to Heartbreaker he was said to have held a fretted note with his right hand whilst hammering on and pulling off with his left hand above. So here's to you Mr. Gibson slingin', bow wielding, effects drenched, drug takin', groupie shaggin' rock star! We've now had tributes to Jimi Hendrix, Stevie Ray Vaughn, Jeff Beck and Jimmy Page. Next up? Eddie Van Halen.
Posted by AndyT13 at 3:18 PM

he is definately a pioneer man!
He was way ahead of his time in the 70's..