These are all lesser influences on me so I give you 3-4-1. These guys are all great guitar players and I love their music but their personal styles are less of a direct influence on me. They get more credit for their influential songwriting, sheer speed and energy. I present you: 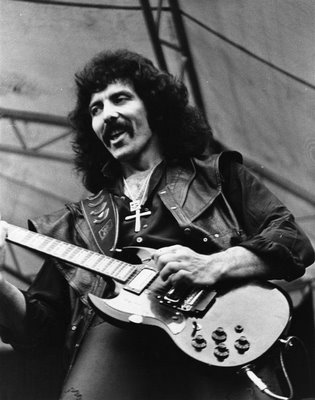 Tony Iommi of Black Sabbath - The Prince Of Darkness' good left hand is a Gibson SG man. Well known for simple riffs organised into tortuously long and complicated arrangements. He's less of a shredder and comes more from the electric blues but is widely considered the father of all Heavy Metal although the origin of the term is debatable. Who hasn't played Iron Man a million times? 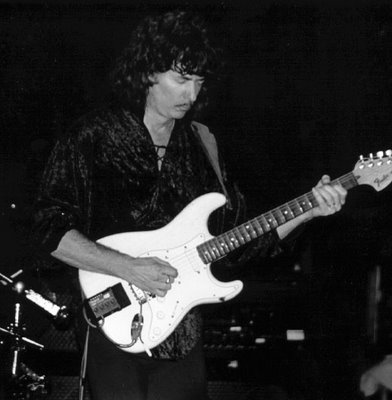 Ritchie Blackmore of Deep Purple - Another strat player like me. Is that a MIDI setup on his bridge there? Black more is known for his use of classical elements in his soloing. He's the father of neo-classsical rock à la Yngwie Malmsteen. Who hasn't played Smoke On The Water a million times? In fact that's one of the most common first riffs anyone learns. 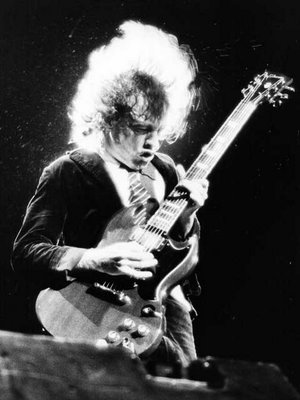 Angus Young of ACDC - another Gibson SG man, Angus is known for the pounding simplicity of ACDCs rock anthems and his lightning fast shredding. Who hasn't played Back In Black a million times?
Posted by AndyT13 at 9:30 AM

You know what the best thing is about these guitar players, right?? Poeple who are not in music don't usually get it...

The reason why all of these guys are still in the game is because their styles are EASY. There's nothing complicated about Angus' playing really... ACDC write tunes, typically, 3 chord blues progressions and that's it.. nothing fancy... just driving sound.

Iommi's the same way really.. Wanna get the best simplicity ever.. listen to "Heaven and Hell" - you can't get anymore simpler than that. But he's a great acoustic picker... love listening to his softer stuff; that's where he shines.

And Ritchie.. Smoke on the water is dead simple - and that's why it's the first song we guitar players learn. Cuz it's a GREAT tune that can play along with right outta the gate.

Blues/Rock band: Eric Clapton, Gary Moore and SRV(if he were alive), with Nathan East on bass and Phil Collins on Drums. Anyone of those guys can sing.

Angus is pure genius. He takes 3 chords and makes the most interesting, bluesy solos that have enhanced every song AC/DC has ever done.

Never been a metal fan but I find what these guys do fascinating anyway.