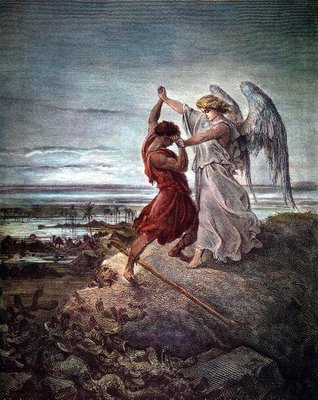 My love was upset with me last night for good reason. I repent my transgression mightily.
I am blessed.
Chapter 13
Jacob and the Angel
JACOB'S wrong in receiving his brother's blessing by fraud was again brought forcibly before him, and he was afraid that God would permit Esau to take his life. In his distress he prayed to God all night. An angel was represented to me as standing before Jacob, presenting his wrong before him in its true character. As the angel turns to leave him, Jacob lays hold of him, and will not let him go. He makes supplications with tears. He pleads that he has deeply repented of his sins and the wrongs against his brother, which had been the means of separating him from his father's house for twenty years. He ventures to plead the promises of God and the tokens of His favor to him from time to time in his absence from his father's house.
All night Jacob wrestled with the angel, making supplication for a blessing. The angel seemed to be resisting his prayer, by continually calling his sins to his remembrance, at the same time endeavoring to break away from him. Jacob was determined to hold the angel, not by physical strength, but by the power of living faith. In his distress Jacob referred to the repentance of his soul, the deep humility he had felt for his wrongs. The angel regarded his prayer with seeming indifference, continually making efforts to release himself from the grasp of Jacob. He might have exercised his supernatural power and forced himself from Jacob's grasp, but he did not choose to do this.
But when he saw that he prevailed not against Jacob, to convince him of his supernatural power, he touched his thigh, which was immediately out of joint. But Jacob would not give up his earnest efforts for bodily pain. His object was to obtain a blessing, and pain of body was not sufficient to divert his mind from his object. His determination was stronger in the last moments of the conflict than at the beginning. His faith grew more earnest and persevering until the very last, even till the breaking of the day. He would not let go his hold of the angel until he blessed him. "And he said, Let me go, for the day breaketh. And he said, I will not let thee go, except thou bless me." The angel then inquired, "What is thy name? And he said, Jacob. And he said, Thy name shall be called no more Jacob, but Israel: for as a prince hast thou power with God and with men, and hast prevailed."
Posted by AndyT13 at 9:31 AM

In Jewish tradition, we truly believe that, as in this story, when we truly feel sorry and repent for the wrong or wrongs we have done we will be forgiven by God. Being forgiven by mortal souls is another thing, but even then I've found that sincere repentence followed by right action can often soften the heart of one who has been hurt. Peace.