Half Naked Thursday In New York 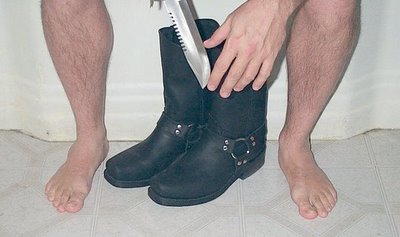 What does this photograph say to you? Make up a story, sing me a song, write me a poem, you can't go wrong. Is it funny, disturbing, sexy, cool, or something else?
Posted by AndyT13 at 10:17 PM

It says you are a biker or a pirate. Either way, yummy in my book.

It makes me think you're a bounty hunter or something. :)

Those are some serious shitkickers you're about to put on and that knife? Well that's some scary looking knife.

I second the "yummy"!

Andy, I'm all for you getting naked, so please don't take this the wrong way... because you asked...

But the first thought that came to my mind is this:

"That knife is WAY to close to his nekkid jewels."

Funny and disturbing all at the same time. Cheers and Happy HNT!

first i have to say, mmm you have very tasty looking feet :)

Practicing a new circus act, the lady-target is blindfolded, quivering in fear..wondering has he practiced enough? Or is my new boob job gonna deflate? Thunk! POP! Ooops, good thing those balloons were in the way.
Happy HNT!

It says "Don't Hurt the Boots" Guys with good shoes are so rare. Kick ass knife though. Happy HNT!

oh hon, that's not a shoehorn! and if you need to cut your toenails i have some nice safe clippers. hehehe

such nice legs and the hands too. i have a thing for hands. very nice

I think AndyT is about to cut his toenails or perhaps the callouses with that dagger.

You are getting ready for a night out with the boys? :P

manly was the first word that came to mind. ANd I am sticking with that.....HHNT!

Digging those boots. And you have intriguing toes. And nibbly ankles. Nice hands too.

linoleum under
your feet
do you show
your knife to all
the girls
you meet?

You've got an edge there! Happy HNT!

Sexy and chilling at the same time. Guess that makes me a tad kinky?

humm that sort of brings to mind Parker talking about knife play during sex on the last show ....... *shivers*

it makes me think of revenge. like you've been planning some payback and are getting ready to carry it out
HHNT

Hmmm...makes me wonder if you're about to cut a few toes to get into those boots....hehehe

Andy! Put that thing away before somebody gets an eye out ... or worse! ... YES, I said OR WORSE!

I"m intrigued at the thought of making up something to go with this, but I'd have to come back to it...

Trust me though, I'm not sure you want to know where my mind went.

(btw, the slight of your finger touching the edge of the knife is so hot...)

hey its rhymes ok? HHNT :p do i win the prize?

It says, I couldn't find the toenail clipper so I dedided to use this here Ginshu Knife to trim them up!

Whoa baby look at that knife!
Luv the boots.
This photo tells me you are a bad ass! :)
Gotta luv them bad boys! HHNT!

Bad boy, bad boy, whatcha gonna do?!?! I know that sounds cheezy, but I can't help but sing this when I look at this picture!! Now you wont be able to get that song out of your head!!! Happy HNT!!

remind me to never wander the streets of New York while you are there... :) now put that thing away before you hurt somebody. HHNT

This photo tells me you like to caress your long, finely crafted tool. And, that you have good taste in boots.

I'm a sucker for a man in biker boots ;)
Happy Hnt!

Do you live on the rough streets of NY? LOL!

I think its sexy!!

How long did it take you to track down those boots?

Billy Jack is coming to get me!

fuck with my boots you die

mmm knives. actually this pic makes me think of crocodile dundee... :) dunno why.

Crocodile Dundee cleans the dirt from under his nails...

Happy HNT and thanks for stopping by!

Happy HNT! Crocodile Dundee Does NY! That's not a knife, THAT'S a Knife! thanks for visiting my HNT. Stacie

Yeah, I must concur with the whole Croc Dundee theme going on. LOL
actually b4 I read the other comments I said outloud "Thats not a knife.. now this is a knife!"

Preparing to commit a homicide?? lol

A woman sought the advice of a sex therapist, confiding that she found it increasingly difficult to find a man who could satisfy her, and that it was very wearisome getting in and out of all these short term relationships.

"Isn't there some way to judge the size of a man's equipment from the outside?" she asked earnestly.

"The only foolproof way, is by the size of his feet," counseled the therapist.

So the woman went downtown and proceeded to cruise the streets, until she came across a young fellow standing in an unemployment line with the biggest feet she had ever laid her eyes on. She took him out to dinner, wined and dined him, and then took him back to her apartment for an evening of abandon.

When the man woke up the next morning, the woman had already gone but, by the bedside table was a $20 bill and a note that read, "With my compliments, take this money and go out and buy a pair of shoes that fit you.

I think maybe you're going to use the knife to kidnap me, and you have the boots 'cause you're taking me to your cabin in the woods. Of course, once you get me isolated, you'll put the knife away and seduce me... of course maybe not right at first. They'll be some screaming and yelling, maybe a fit thrown, you'll get all bossy like... he-manish and dominant, heck, you might even have to punish me to calm me down, but eventually you'll put the knife away and have your way with me... and I'll be willing!

Oh my....so much to say about that, not sure I should say anything at all. Happy HNT!

I was looking to my boots
To take me somewhere else
But then something cut me there
And left me feeling bare!

oh, BTW, I stand corrected, some schooled musicians frown upon the "thumb over" technique! Cheers!

Sung to the tune of "Teddy Bear Picnic":

(you did say it was okay to sing you a song)

I think that you are fixing to go to take care of your baby sisters abusive boyfriend and you don't want to have the evidence on your clothes or shoes.

To me it's like you just cleaned up after doing something sinister...an act of revenge or the like. ;) happy hnt!

It hung low,
Almost to his toe.
Sharp and jagged,
He brushed his fingertips against the blade,
contemplating the mistake he never made.
For he was not the killing kind,
No boots,
No knife,
No naked soul,
Could make me think otherwise.

btw, I have those boots in brown :)
Happy HNT Andy!

Hmm... Interesting pict.. Let me think... My mind swirls.... can ya hear it? Like a big ol' Texas dust storm... WHOOSH..k..few thoughts..
Does this big knife explain the lack of visible toe jam from last and this weeks picts?..
And, you DO know, there ARE more acceptable (and antiseptic) ways to preform this "Toe Jam Eratication Ritual".. Heck, there are even people you can pay to do this for you!!.. and, if THEY accidently mame or (gulp) cut off one of your 'extra' parts, .. well, shit,.. **POOF**You Are A Rich Man!!...

Write you a poem,
A story or song..

No, I dont think so,
That would be just plain wrong,

I'd much rather think,
That blade, shiney and long,

Was a much needed tool,
To free you from to tight a THONG!!

It could happen... Was in a hurry.. Was gettin dressed in the dark.. Grabbed his Hunny-Bunnies panties by mistake.. ya, ya.. by mistake... ya..ya.. that's the ticket...

(On a personal note: "I" have been having 'technical difficulties' ... Please stand by.. I apologize for any inconveinence. Your patientce is greatly appretiated.

So there I was returning through a small seaside village on the Island of Naxos, from a four-hour hike to an overlook with an amazing view of the Aegean Sea, when I came to this meadow that ran down to the beach. It was late and the beach was emty, so I thought why not go for a swim. Since I didn't have my swim suit with me I just went in the nude. The water on my nakid body felt so arousing that I lost my self in the delight and satisfaction of it. I didn't notice when my feet became tangled in some fishing line. Just then this man emerged from the water next to me with this sizable and grand knife and freed from the line. Our bodies touched as he freed me, he was naked as well. The response my body had to this man was surprising and pleasing. We had some fun in the water and them reluctanly had to return to the hotel. He had come down to the beach for a swim in just his boots. I asked him what made him bring the knife and he said that he just felf he might need it.