OK, I'm posting these pix of Chris Evans (The Human Torch in Fantastic Four - fun movie!) for several reasons. One: Let's face it; the guy is freaking hot already! Two: He's my new role model. Since I quit smoking and drinking and started working out THIS is what I want my tired old body to look like. I'm doing well in the shoulders and arms. Still got a ways to go on the abs but who doesn't? Oh. Him. Let's see, what else? Reason three: My friend Laurie over at http://strandedinsuburbia.blogspot.com/ posted a pic of a buff guy with no body hair that grossed me out immensely. Now THIS guy is hot. THAT guy was just weird looking. I probably offended half of the internet saying "Eh, he looks GAY." Whoops. It just slipped out (pardon the pun). Anyway I guess this is a prelude to HNT. Tomorrow I'll post a hint of my progress if I have time. I might not because the lovely Brenda is coming home after 4 days and I plan on pouncing on her like a starving tiger on a wounded wildebeast. How's THAT for an image? OK, I'm outtie. 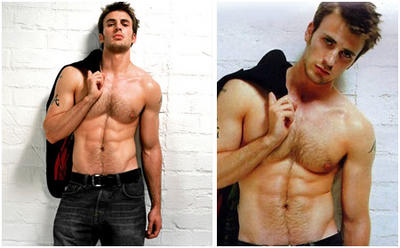 whatever, that chiseled pec and ab thing is waaaaaaaaaaaaay overrated. of course, guys always think they know exactly what we want.